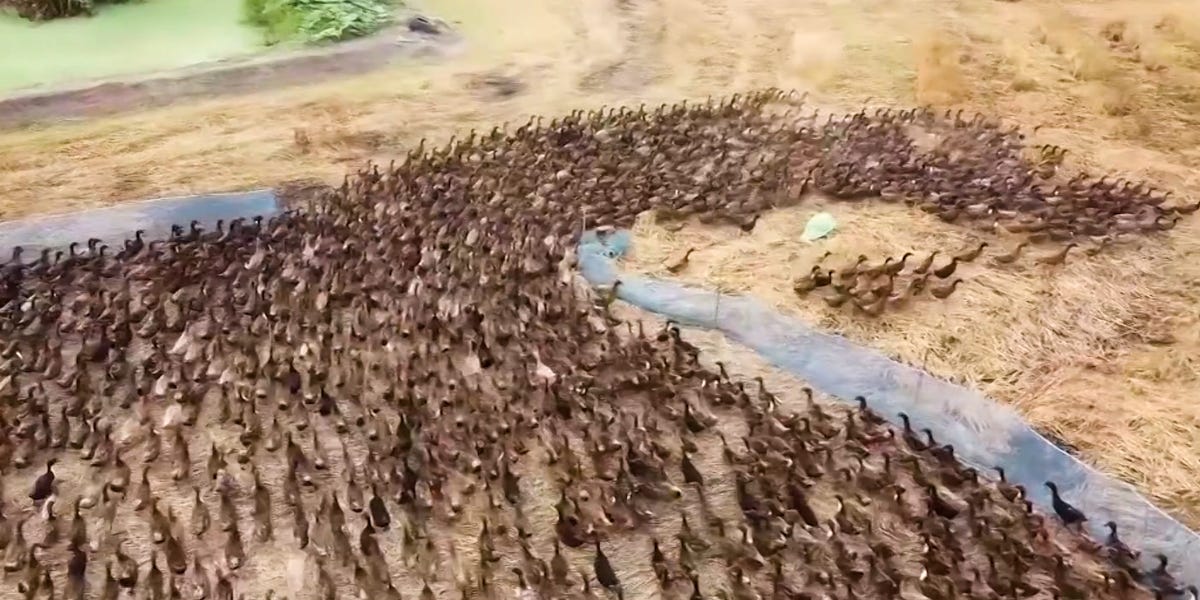 Farmers in Thailand use armies of 10,000 ducks to rid rice paddies of pests

Rice farmers in Thailand are enlisting these birds, called “field chasing ducks” to eat their way through rice paddies after a harvest.

“They help eat golden apple snails and the remains of unwanted rice husks that remain in the field from the last harvest,” farmer Prang Sipipat told Reuters. “The ducks also step on the rice stubble to flatten the ground and that makes it easier to plow.”

This integrated farming system is traditional here in Thailand and other Asian countries. Small-scale farms are common, and this way, ducks don’t spend their entire lives on a factory farm.

Field-chasing ducks are often a breed called Khaki Campbell, known for its reliable egg-laying. When they’re 20 days old, ducks are brought to the fields and get to graze in large herds as they are moved from farm to farm. The young ducks are raised this way until they’re around five to six months old, when they’ll return to the breeder’s farm to lay eggs for a few years or to be sold as meat.

As of March 2020, there were about 30 million ducks farmed throughout Thailand. And almost a quarter of them were field chasing ducks.

Rice is one of Thailand’s most important crops. From January to August this year, the country exported more than 4 million tons of it.

Studies suggest that integrated rice-duck farming systems are not only beneficial to the environment, but they also can increase crop yield.

But raising thousands of free-range ducks in these fields still has some risk. Ducks were found to be mostly silent carriers of the H5N1 avian flu outbreak that devastated the Thai poultry industry, and caused 25 human deaths, from 2004 to 2006.

Still, for breeders like Apiwat Chalermklin, using a duck army is a sort of closed-loop system that benefits all parties involved.

“The benefit is that we reduce costs to feed the ducks. We don’t need to feed them until they are grown up,” he said. “And in return, for the rice farmers, the ducks help eliminate pests for farmers and the farmers can reduce the use of chemicals and pesticide.”