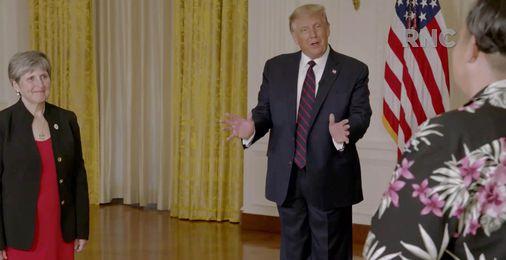 THE FACTS: You don’t hear it because it’s not true.

People with preexisting medical problems have health insurance protections because of President Barack Obama’s health care law, which Trump is trying to dismantle.

Neither of the two alternatives appears to have made much difference in the market.

Meanwhile, Trump’s administration is pressing the Supreme Court for full repeal of the Obama-era law, including provisions that protect people with preexisting conditions from health insurance discrimination.

Insurers must take all applicants, regardless of medical history, and charge the same standard premiums to healthy people and those who are in poor health, or have a history of medical problems.

Before the Affordable Care Act, any insurer could deny coverage — or charge more — to anyone with a preexisting condition who was seeking to buy an individual policy.

Democratic attacks on Republican efforts to repeal the health law and weaken preexisting condition protections proved successful in the 2018 midterms, when Democrats won back control of the House.

TRUMP, on mail-in voting: “Absentee — like in Florida — absentee is good. But other than that, they’re very, very bad.”

THE FACTS: He’s making a false distinction. Mail-in ballots are cast in the same way as absentee mail ballots, with the same level of scrutiny such as signature verification in many states.

In more than 30 states and the District of Columbia, voters have a right to “no excuse” absentee voting. That means they can use mail-in ballots for any reason, regardless of whether a person is out of town or working.

In Florida, the Legislature in 2016 voted to change the wording of such balloting from “absentee” to “vote-by-mail” to make clear a voter can cast such ballots if they wish. So there is no “absentee” voting in that state, as Trump alludes to.

More broadly, voter fraud has proved exceedingly rare. The Brennan Center for Justice in 2017 ranked the risk of ballot fraud at 0.00004% to 0.0009%, based on studies of past elections.

Only nine states currently have plans for “universal” mail-in voting, where ballots are sent automatically to registered voters. Five of those states relied on mail-in ballots even before the coronavirus pandemic raised concerns about voting in person.

TRUMP, on the November vote count and Democrats: “We have to be very, very careful and this time they are trying to do it with the whole post office scam. They will blame it on the post office. You can see them setting it up.”

THE FACTS: No postal scam has emerged from the Democrats. Instead Trump has given credence to suspicions that he wants to suppress mail-in voting to help his chances in the election.

He’s said as much. In an interview this month, he admitted he’s trying to starve the U.S. Postal Service of money in order to make it harder to process an expected surge of mail-in ballots, which he worries could cost him the election.

Trump explicitly noted funding provisions that Democrats are seeking in a relief package that has stalled on Capitol Hill. Without the additional money, he said, the Postal Service won’t have the resources to handle a flood of ballots from voters who are seeking to avoid polling places during the coronavirus pandemic.

Over the weekend, the House approved legislation that would reverse recent changes in postal operations and send $25 billion to shore up the agency before the November election, but the White House has said Trump would veto it.

During a House hearing, Postmaster General Louis DeJoy acknowledged that Trump’s repeated attacks on mail-in ballots are “not helpful,” but he denied that recent cuts were linked to the election.

TRUMP, on defective ballots in an election: “What does defective mean? It means fraud.”

THE FACTS: No, defective ballots do not equate to fraud. The overwhelming majority aren’t.

According to the Brennan Center for Justice, the vast majority of ballots are disqualified because they arrive late, a particular worry this year because of recent U.S. Postal Service delays and an expected surge in mail-in voting during the coronavirus pandemic.

Ballots also are deemed defective if there is a missing signature — common with newer voters unfamiliar with the process — or it doesn’t match what’s on file. In addition, some states require absentee voters to get a witness or notary to sign their ballots.

“None of those are fraud,” said Wendy Weiser, director of Brennan’s democracy program at NYU School of Law. When suspected cases are investigated for potential fraud, studies have borne out the main reason for defects is voter mistake, she said.

Defective ballots also disproportionately impact voters of color, and recent lawsuits have successfully challenged some requirements as posing health risks or disenfranchising voters. Earlier this year, for instance, a federal judge ruled that a South Carolina requirement to have witnesses to mail-in ballots could put voters’ health at risk and suspended it for the June primary. Others states including Minnesota and Rhode Island have also suspended that requirement due to the pandemic.

While the rates of defective ballots are unacceptable, “people should still feel confident in their votes, and they should follow-up,” Weiser said. “People should know these problems are being fought over and hopefully many will be mitigated and addressed before November.”

REP. STEVE SCALISE of Louisiana on the police: “Joe Biden has embraced the left’s insane mission to defund them.”

THE FACTS: No, Biden has explicitly rejected the call by some on the left to defund the police. He has proposed more money for police, conditioned on improvements in their practices.

Biden’s criminal justice agenda, released long before the protests over racial injustice, proposes more federal money for “training that is needed to avert tragic, unjustifiable deaths” and hiring more officers to ensure that departments are racially and ethnically reflective of the populations they serve.

REP. JIM JORDAN of Ohio on the Democratic agenda: “Defund the police, defund border patrol and defund our military.”

RONNA McDANIEL, chairwoman of the Republican National Committee: “You deserve to know that they would ban fracking and eliminate fossil fuels, which would kill millions of good-paying jobs and raise the cost of driving our cars and heating our homes. You deserve to know that they want a complete government takeover of our health care system, so moms like me won’t be able to take our kids to the same pediatrician they’ve been seeing for years.”

THE FACTS: Those aren’t Biden’s positions. A number of Republican speakers seized on proposals of the Democratic left, in some cases distorting those positions, and assigned them to Biden, who doesn’t share those views.

He does not favor a government takeover of health care; instead he proposes building on “Obamacare,” which preserves the private insurance market while expanding Medicaid.

He also did not endorse proposals to cease border enforcement or even to decriminalize illegal crossings.

In a March 15 primary debate, Biden misstated his energy policy, suggesting he would allow no new fracking. His campaign quickly corrected the record. Biden has otherwise been consistent on his middle-of-the-road position, going so far as to tell an anti-fracking activist that he “ought to vote for somebody else” if he wanted an immediate fracking ban.

DONALD TRUMP JR. on the coronavirus response: “The president quickly took action and shut down travel from China.”

THE FACTS: He didn’t shut down travel from China. He restricted it. Dozens of countries took similar steps to control travel from hot spots before or around the same time the U.S. did.

The U.S. restrictions that took effect Feb. 2 continued to allow travel to the U.S. from China’s Hong Kong and Macao territories over the past five months. The Associated Press reported that more than 8,000 Chinese and foreign nationals based in those territories entered the U.S. in the first three months after the travel restrictions were imposed.

Additionally, more than 27,000 Americans returned from mainland China in the first month after the restrictions took effect. U.S. officials lost track of more than 1,600 of them who were supposed to be monitored for virus exposure.

Dr. Anne Schuchat, the No. 2 official at the U.S. Centers for Disease Control and Prevention, also told The Associated Press that the federal government was slow to understand how much coronavirus was spreading from Europe, which helped drive the acceleration of outbreaks across the U.S. in late February. Trump didn’t announce travel restrictions for many European countries until mid-March.

DONALD TRUMP JR.: “The president acted quickly and ensured ventilators got to hospitals that needed them most. He delivered PP&E to our brave front-line workers.”

THE FACTS: No, not all hospitals and front-line workers got the ventilators and personal protective equipment they needed. States were left scrambling in the early weeks of the pandemic, while Trump scoffed at some of their requests, calling them inflated.

New York acquired a shipment of 1,000 ventilators f rom the Chinese government and 140 from the state of Oregon. Massachusetts borrowed the New England Patriots’ jet to pick up 1 million masks from China.

While California Gov. Gavin Newsom was tracking down 10,000 ventilators for his state, he got 170 broken ones from the national stockpile. And a federal shipment of 300,000 N95 masks that Illinois was supposed to receive in March turned out to be less-effective surgical masks instead, Gov. J.B. Pritzker said at the time.

DONALD TRUMP JR, on his father: “So if you’re looking for hope, look to the man who did what the failed Obama-Biden administration never could do and built the greatest economy our country has ever seen.”

THE FACTS: That’s false. The economy was healthy before the coronavirus pandemic hit but not the best in U.S. history.

Economic gains largely followed along the lines of an expansion that started more than a decade ago under Obama. And while posting great job and stock market numbers, Trump never managed to achieve the rates of economic growth he promised in the 2016 campaign, nor growth rates seen in the past.

The Obama-Trump years yielded the longest economic expansion in U.S. history, but not the greatest,

McDANIEL: “You deserve to know about their plans to raise taxes on 82% of Americans.”

An analysis of Biden’s tax plan by the University of Pennsylvania’s Penn Wharton Budget Model in March found that the bottom 90 percent of income earners would not pay more in federal income taxes under Biden’s proposal.

TRUMP JR. on his “He’s pledged to repeal the Trump tax cuts, which were the biggest in our country.”

THE FACTS: Trump’s tax cuts are nowhere close to the biggest in U.S. history.

It’s a $1.5 trillion tax cut over 10 years. As a share of the total economy, a tax cut of that size ranks 12th, according to the Committee for a Responsible Federal Budget. President Ronald Reagan’s 1981 cut is the biggest, followed by the 1945 rollback of taxes that financed World War II.

Post-Reagan tax cuts also stand among the historically significant: President George W. Bush’s cuts in the early 2000s and Obama’s renewal of them a decade later.

Biden has pledged to raise taxes on wealthy people and not the middle class and working class.

Seitz reported from Chicago. Associated Press writers Matthew Daly and Ricardo Alonso-Zaldivar in Washington and Bill Barrow in Atlanta contributed to this report.

EDITOR’S NOTE — A look at the veracity of claims by political figures.