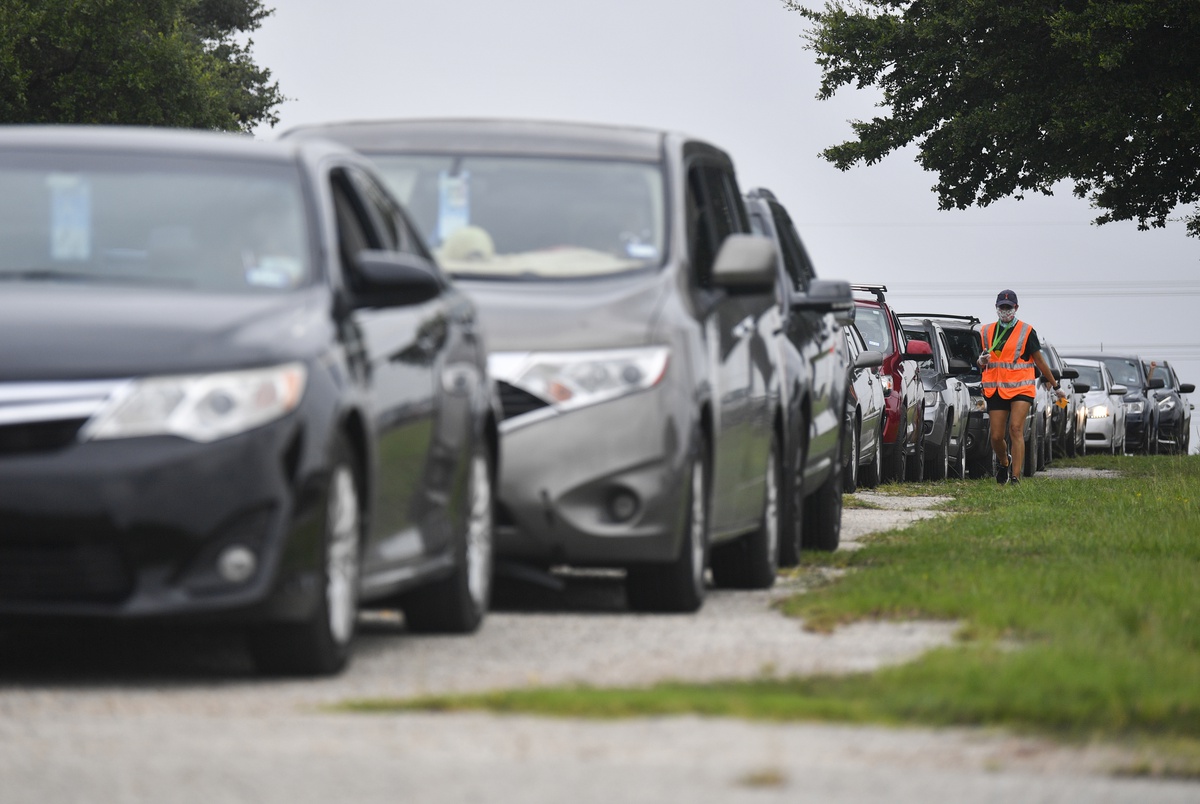 Sign up for The Brief, our daily newsletter that keeps readers up to speed on the most essential Texas news.

It was Sunday night and his 9-year-old son was hungry, so Saltillo started on dinner while preparing for the first day of his last semester at El Paso Community College — at least he hopes it’s his last.

Money has been tight. There are electricity bills, groceries and $650 per month for rent. Books and school courses also cost money, which hasn’t been coming in like it had before August.

The 42-year-old full-time student, who hopes to get a job in counseling or social work, has been jobless since the coronavirus pandemic upended businesses in El Paso, and his part-time work checking tickets at local events dried up.

“I’m supposed to start school tomorrow,” Saltillo said Sunday night. “I’m just 12 credits away from graduating. But I’m already thinking about quitting so I could find a job full time or taking out some more student loans to have that extra money.”

Because Saltillo worked part-time jobs, the Texas Workforce Commission’s formula for determining unemployment benefit payments calculated that he receive $69 per week, the minimum amount available to Texans. It was no problem for Saltillo, though, after Congress passed sweeping legislation in March that included an extra $600 per week for anyone receiving unemployment benefits.

“I was OK with that once I found out they were giving everyone 600 bucks,” Saltillo said. “That was fine, it worked out great.”

He rode a 4.0 grade-point average into his summer classes, received $600 each week, on top of the $69, and was a step closer to December graduation.

But when July ended, so did the $600 checks. The legislation expired, and Saltillo was left receiving $69 a week.

“Like $120-something every two weeks does nothing,” he said. “It’s hard because I got my son, so I can’t work full time.”

On Aug. 8, with Congress unable to agree on new legislation for additional unemployment payments for people jobless due to the coronavirus, President Donald Trump offered hope: $400 would be added to weekly unemployment checks for eligible recipients. But a subsequent announcement clarified that people would actually receive $300 per week, and an additional $100 if states decided to chip in that money. Texas opted not to do so.

And there was another caveat — anyone receiving less than $100 per week in jobless relief would not be eligible for the new $300.

“I was thinking all the way up to two or three days ago, I was expecting this money,” Saltillo said Sunday. “I was thinking, man, that’s five weeks, that’s 1,500 bucks, I could feed my son longer, you know what I mean?”

Like nearly 350,000 other Texans, Saltillo is not eligible for the extra payments.

“I’m not real big on politics, but I do vote Republican, I do support Trump,” Saltillo said. “But I really feel like this is a kick in my teeth, man.”

Some of the Texans who don’t qualify for the money get more than $100 a week from the state but are ineligible for the extra $300 because they did not indicate on their unemployment filings that they lost work because of the coronavirus pandemic.

The historic surge of people seeking unemployment benefits this year has made the TWC infamous for long wait times when people call the agency to file for unemployment or request payments. Some people weren’t clear on whether they qualified for the extra $300 but had a hard time finding out from the agency if they do.

After receiving three weeks of funding, the state must now reapply for federal aid each week so Texans can continue receiving the unemployment supplement, said Cisco Gamez, spokesman for the Texas Workforce Commission. The commission received federal funds through the week ending August 15, he said.

“At some point, either we’re going to continue to do that until funding runs out for the FEMA program, new legislation has passed so we’re not doing that anymore, or this program expires,” Gamez said. “It’s one of those three things.”

He said when the state requests funds, FEMA has the option of sending the same amount, sending more, less or nothing at all.

“We’re going to keep doing this until funding runs out, until there’s new legislation passed or the program expires,” Gamez said. “I don’t have a timeline on it or when any of that’s going to happen.”

Lena Blietz, who lost her job as a reporter in San Antonio in June, ran into that problem when she tried to contact TWC this month to see if she qualified.

“Because of my time covering coronavirus, I knew people were having trouble,” she said of the agency. “Then I saw it myself.”

After losing the $600 extra payment in July and scrambling to find out if she would get the new $300 federal payment, she learned that she was one of the lucky ones: She qualifies.

She said there are plenty of Texans who are in much worse shape than her, but her situation underscores how the pandemic has impacted every industry.

“It’s not just servers at restaurants and bars who are unemployed,” Blietz said. “Many people have it way worse than me, and I almost feel guilty talking about my situation. But just for anyone who isn’t aware of what’s going on, this is affecting people who you might not realize.”

Despite not receiving the extra money, Saltillo said he does not feel bad for himself. He just struggles to understand why the payments aren’t available for the people who most desperately need assistance as the pandemic persists.

“What bothered me the most was like the principles of the matter,” Saltillo said. “It just doesn’t seem fair — like why they would do that to the group of people who really need it, you know?”

Saltillo has until early November to decide whether he will drop any courses. He’s taking a wait-and-see approach to figuring out whether student loans and $69 a week in unemployment he can sustain him and his son that long.

“So my plan is: If things aren’t working out, worst-case scenario, I’ll drop the class I’m doing worst in,” he said. “But I want to keep them all because I want to graduate.”

Aria Jones contributed to this report.

El Paso Community College has been a financial supporter of The Texas Tribune, a nonprofit, nonpartisan news organization that is funded in part by donations from members, foundations and corporate sponsors. Financial supporters play no role in the Tribune’s journalism. Find a complete list of them here.