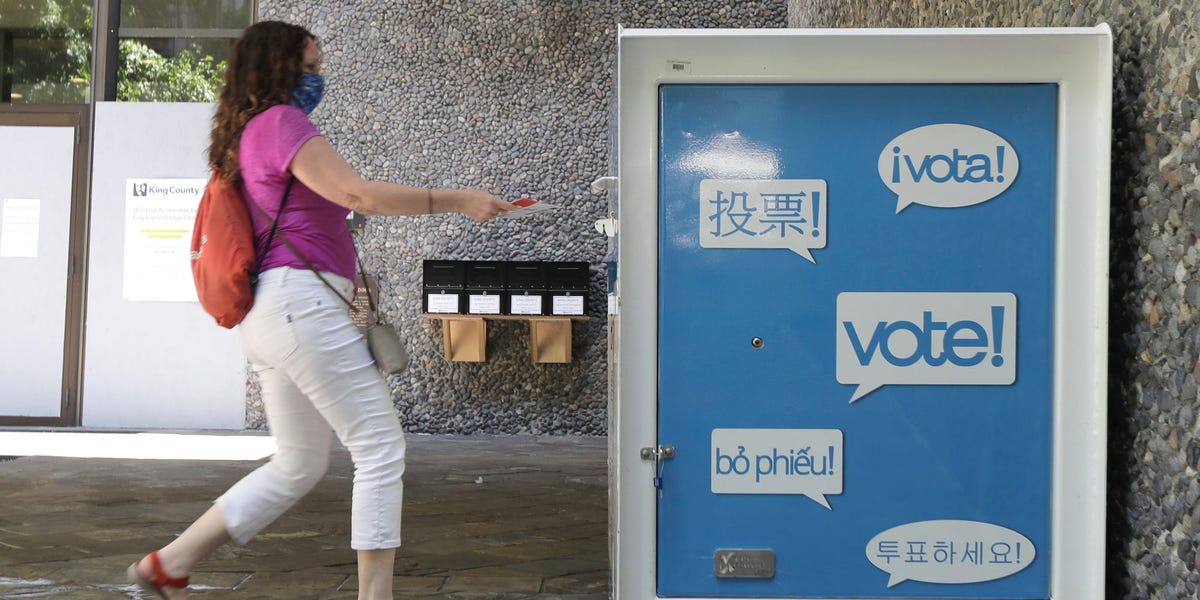 A dozen state election websites are not accessible to millions of visually impaired voters, according to a report from a nonprofit released Thursday.

Election websites for 12 battleground states (Colorado, Florida, Iowa, Michigan, Minnesota, Nevada, New Hampshire, North Carolina, Ohio, Pennsylvania, Virginia, and Wisconsin), according to a report compiled by Miami Lighthouse for the Blind, do not follow accessibility guidelines recommended by the World-Wide Consortium, which sets standards for accessibility on the world wide web.

While many of those standards are followed by various businesses, nonprofits, and governmental entities, they have not been adopted into the Americans with Disabilities Act, which prohibits discrimination against people with disabilities in areas like employment, education, and transportation. Therefore, there is no federal mandate requiring websites, in general, to be accessible to people who are blind or visually impaired.

To evaluate state election websites, Miami Lighthouse adapted guidelines from the World-Wide Consortium, which lists multiple parameters that websites should meet to be accessible to people who are blind or visually impaired.

The nonprofit ranked each battleground state according to a scale from 1 to 4, with 1 representing inaccessible and 4 representing entirely accessible. Sites that received a 1-rating risk people who are blind or visually impaired missing out on critical voting information, according to the report, titled “The 2020 ADA Compliance Meter Report: Swing State Board of Elections Websites.”

None of the 12 websites analyzed scored a 4, the report said. While Miami Lighthouse centered their evaluation 0n these states, its CEO Virginia Jacko indicated the organization might consider other states in the future.

According to the National Federation of the Blind, those 12 states are home to about 2.3 million people who have a visual disability. Their ability to participate in the election could impact the outcome in November, Jacko, who authored the report, told Business Insider.

“That is a lot of voters that are being denied information,” Jacko said.

Here’s how each battleground state scored, according to the report:

In its evaluation, Miami Lighthouse tested for 10 specific features listed by the World-Wide Consortium as best practices to ensure accessibility for voters who are blind or visually impaired. Using assistive technology software such as screen readers, the websites were analyzed for descriptive text accompanied by logos and links, how well they were arranged to foster ease of navigation, and if they enabled users to change colors and font sizes, according to the report.

According to disability rights attorney Eve Hill, accessibility has been a long-running issue in elections.

“The Justice Department has been saying that state and local government websites have to be accessible since 1996,” said Hill, whose client, the National Federation of the Blind, has sued some of the states mentioned in the Miami Lighthouse report for inaccessibility in voting.

“Others have sued North Carolina and Florida, regarding inaccessible absentee voting,” she said in an email.

Most government agencies in charge of running the 12 election websites did not respond to a request for comment from Business Insider. The Ohio Secretary of State’s office, responsible for governing the election website examined by Miami Lighthouse, declined to comment, citing a lack of familiarity with the report.

Kevin Hall, communications director for Iowa Secretary of State Paul Pate said in a statement to Business Insider that his office “will review the recommendations outlined by the Miami Lighthouse for the Blind and adjust accordingly.”

Hall also called “Iowa is a national leader in voter accessibility,” pointing to a government webpage “dedicated to providing resources and information to Iowa voters with disabilities. It includes instructional videos, online brochures, toolkits for groups to utilize, FAQs and more.”

When reached for comment, Pennsylvania’s Department of State, which is responsible for running elections in the state, said the website examined in the report does not serve as its official site for voters.

The site Miami Lighthouse evaluated is “primarily aimed at election administrators and candidates, although of course, the technical information is available to anyone,” said Wanda Murren, director of communications and press at the Pennsylvania Department of State. She pointed to another website for voter education that she said “has been thoroughly reviewed by a team of accessibility experts who specialize in governmental websites.”

There is no law requiring websites to be accessible

It’s not legally required for websites to be accessible to people who are blind and visually impaired, and it is not enforced by the ADA, according to Clare Pastore, a disability rights and legal aid expert at the University of Southern California.

“Website access is one of the frontiers of disability rights litigation these days although of course, the ADA does not speak explicitly about the web since it was passed in the 1990s, before the web was a thing for the public,” Pastore said in an email to Business Insider.

But there might be some gray area, according to experts who say that there is litigation around the ADA and elections accessibility.

Elections sites fall under Title II of the ADA, which governs most “services, programs, and activities provided to the public by State and local governments,” according to Pastore.

The basic requirement to meet ADA compliance is “equally effective communication, so whatever a state or local government communicates to the public, it has to communicate equally effectively to people with disabilities,” attorney Hill said. Elections websites that are not meeting that standard are “most certainly” in violation of the ADA, Hill told Business Insider.

Those opposed “might try to argue, ‘Well, you could call a phone line and we’ll give you all the same information.’ But that’s not equally accessible. The phone lines are not open 24/7. They won’t actually read you the whole website, or search for what you’re looking for. So yes, essentially, if they’re not accessible, they’re violating ADA,” Hill added.

Still, it might be tricky to prove that state elections sites are not in compliance with ADA, according to Pastore.

Title II of the ADA says that a government’s program, service, or activity must be modified to facilitate accessibility unless that change would “‘fundamentally alter’ it” or impose “undue burden” on the agency, Pastore said.

As local and state officials nationwide are expanding vote-by-mail access to curb the spread of coronavirus, election websites disseminating crucial election information that is not accessible to voters run the risk of disenfranchisement, experts said.

“Too often, the blind and visually impaired and people with disabilities…are forgotten,” Jacko said. “It’s a sighted world, and it’s not that often that computer scientists, information technologists, myself, that are totally blind, have the expertise to be able to look at websites and evaluate them for compliance with ADA, based upon the standard ADA parameters.”