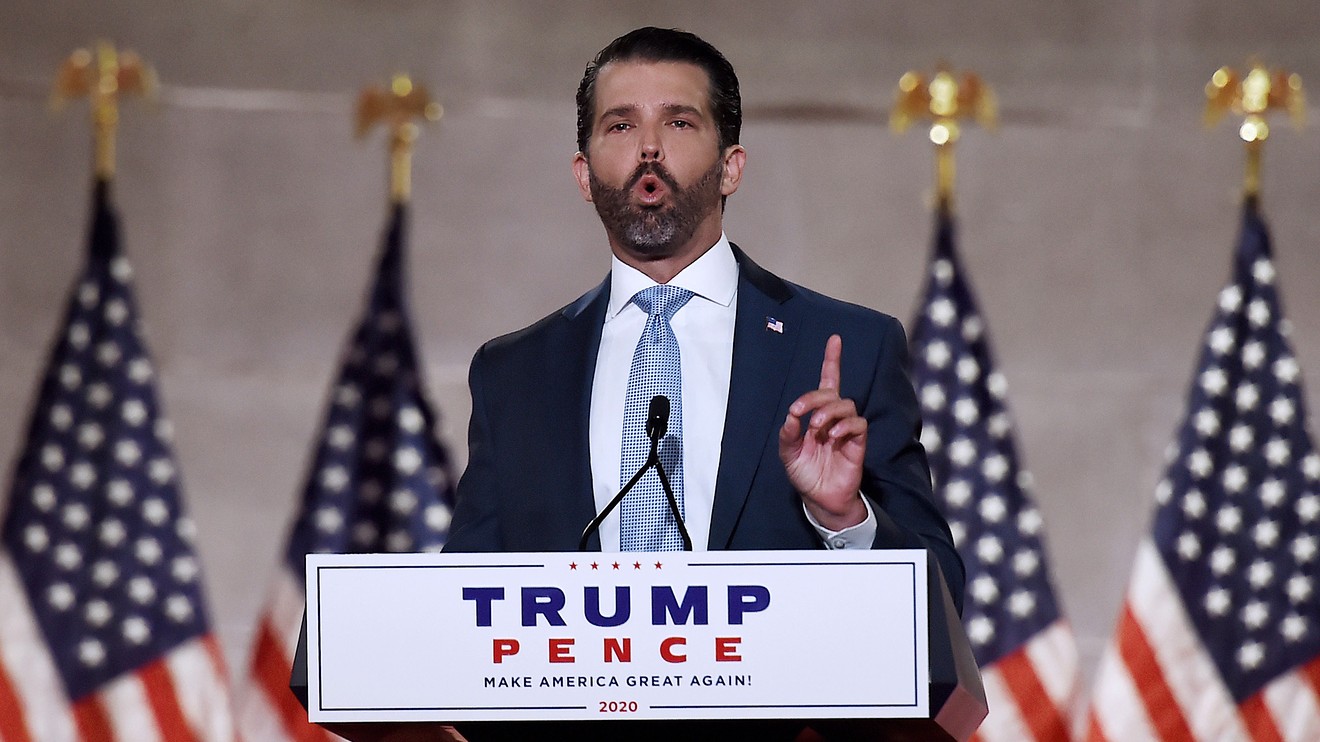 President Donald Trump’s eldest son helped the Republican Party kick off their national convention on Monday night with an attack on Democratic challenger Joe Biden, as other speakers also laid into the former vice president.

See:Biden says he would be open to shutting the economy down to halt the spread of COVID-19

The GOP incumbent’s oldest son said Biden has supported “the worst trade deals in the history of the planet,” such as Nafta, which the Trump administration has replaced, as he also accused the Democratic nominee of wanting to “bring in more illegal immigrants to take jobs from American citizens.” In addition, he went after Biden for promising to repeal most of Trump’s tax cuts.

“Biden has promised to take that money back out of your pocket and keep it in the swamp,” Trump Jr. said.

“That makes sense though, considering Joe Biden is basically the Loch Ness monster of the swamp. For the past half-century, he’s been lurking around in there. He sticks his head up every now and then to run for president, then he disappears and doesn’t do much in between.”

The president’s son linked shutdowns triggered by the coronavirus pandemic and recent violent protests following police killings of Black Americans, saying the November presidential election is almost “shaping up to be church, work and school vs. rioting, looting and vandalism — or, in the words of Biden and the Democrats, ‘peaceful protesting.’”

The remarks came on the first night of the Republican National Convention, after the president earlier in the day formally secured the party’s nomination. The president also appeared in person during the event’s roll-call voting in Charlotte, N.C., and criticized Biden for not traveling to his party’s convention last week amid public-health concerns during the coronavirus pandemic.

Among the other speakers at the GOP event on Monday night were Nikki Haley, the former South Carolina governor who served as the Trump administration’s ambassador to the United Nations, as well as Sen. Tim Scott of South Carolina, and Mark and Patricia McCloskey, the St. Louis couple who brandished guns at protesters during a racial-injustice demonstration outside their home.

Scott, who is Black, praised the Trump administration’s work with a 2018 criminal-justice reform law, while blasting Biden’s track record on racial issues. The senator brought up Biden’s suggestion that voters “ain’t Black” if they consider backing Trump, as well as the veteran Democratic politician’s support for 1994 crime legislation that is blamed for mass incarcerations of minorities.

“If you stand up for yourself and for the values our country was founded on, the mob spurred on by their allies in the media will try to destroy you,” Mark McCloskey said. “You know that we’re not the kind of people who back down. Thankfully, neither is Donald Trump.”

Trump also was featured, as expected, during Monday night’s programming, appearing in one pre-recorded video in which he praised front-line workers and defended his administration’s handling of the U.S. Postal Service. He also appeared in another clip with Americans who had been hostages in Syria, Venezuela and other countries before being freed following moves by the Trump administration.

“We’re taking good care of our postal workers,” Trump told the front-line workers, who included a USPS employee, a trucker, a nurse, a police officer and others. “Believe me, we’re not getting rid of our postal workers. You know they’d like to sort of put that out there.”

Trump and his fellow Republicans have been expected to aggressively counterattack the Democrats and their presidential nominee at this week’s GOP convention, a four-day affair that aims to make the case that it is Trump and not Biden who can revive the pandemic-battered U.S. economy.