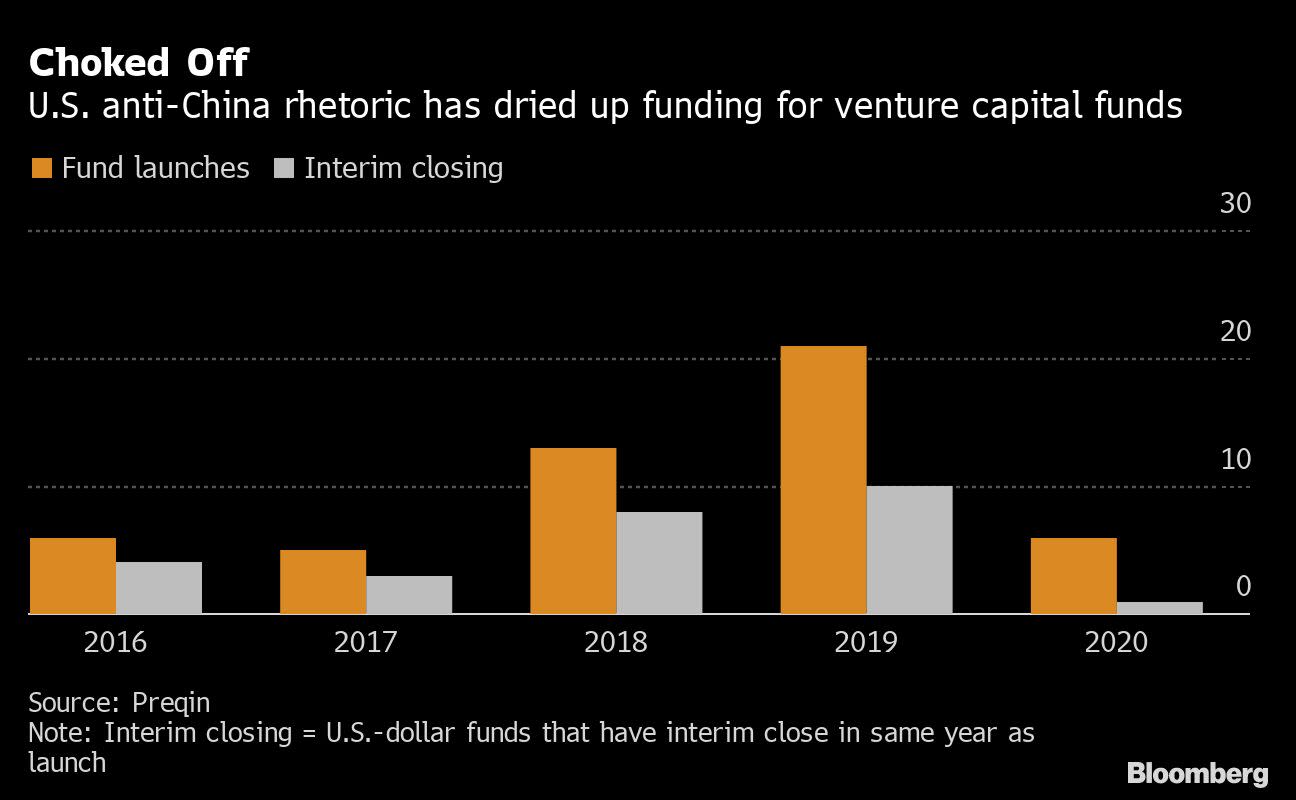 Just six U.S.-dollar funds with exposure to China have sought to raise capital this year, down from 21 last year, according to researcher Preqin. Of those, only one has managed to complete a preliminary closing, compared with 10 last year.

It’s a drastic reversal of the venture boom that fueled China’s tech industry in the past decade. The U.S. State Department has asked colleges and universities to divest from Chinese holdings in their endowments, warning of potentially more onerous measures on holding the shares. That’s on top of a wider campaign to curb Chinese tech champions and slow the money flowing into what are some of the world’s largest tech companies, including Alibaba Group Holding Ltd. and TikTok owner Bytedance Ltd.

“U.S. pension funds and endowments have been the biggest beneficiaries from investing in the China growth story,” he said.

While some venture funds including DCM and Jeneration Capital were able to close financing rounds this year, those efforts started last year. Preqin tallies the initiation of a fund based on public filings such as with the U.S. Securities and Exchange Commission.

The coronavirus has hit funds globally. In the U.S., while fund launches didn’t see as drastic a fall in relative terms, new funds with U.S. exposure seeking money fell by 6% to 646. The number of funds that managed to complete an interim closing fell 76% to 14 compared with last year.

Investors raising U.S.-dollar funds to target China’s fast-growing tech industry usually seek backing from American pensions or endowments. That backing has helped create some of the biggest private tech firms like artificial-intelligence giant SenseTime Group Ltd. — currently fundraising at an $8.5 billion valuation — and Jack Ma’s Ant Group, which could be worth $210 billion based on Bernstein estimates.

Some of the world’s biggest private equity funds, including Silver Lake Management LLC, Carlyle Group Inc. and Warburg Pincus LLC, have pinned their growth on investing in Chinese companies. All three put at least $500 million in Ant and stand to generate up to 40% returns when the firm goes public.

Chinese companies can still look to listing in Hong Kong to allow investors to realize their gains. And in recent years, investors shaken by volatile markets have increasingly shifted to parking their money with the biggest funds with a proven track record.

The State Department’s letter warned endowments it would be prudent to divest from Chinese stocks in the “likely outcome” of a wholesale de-listing of Chinese companies from U.S. exchanges by the end of next year.

The U.S. Senate in May passed a bill that threatens to remove all Chinese companies from U.S stock exchanges, unless a U.S. accounting regulator is allowed to inspect their auditors. The House of Representatives has also acted on its version of the bill, making it more likely that some form of legislation will be enacted.

Those bills were initiated in the fallout of scandals at Luckin Coffee Inc. and TAL Education Group.

The global market value of Chinese firms facing delisting from the U.S. totaled $1.9 trillion at the end of 2019, according to Will Cai, a partner and head of capital markets at law firm Cooley Asia.

These companies have generally outperformed their American peers. The BNY Mellon China ADR Index, which tracks U.S.-listed Chinese firms, surged more than 389% in the past 16 years, versus 208% for the S&P 500 Index.

“American investors could lose the opportunity to cash out their billions of dollars of investment before a company starts generating returns, and lose a channel to invest in growth,” said Cai.

2020-08-23
Previous Post: NFL teams interested in Earl Thomas after his release
Next Post: How QF’s business accelerator programme boosted one idea to become a technological reality