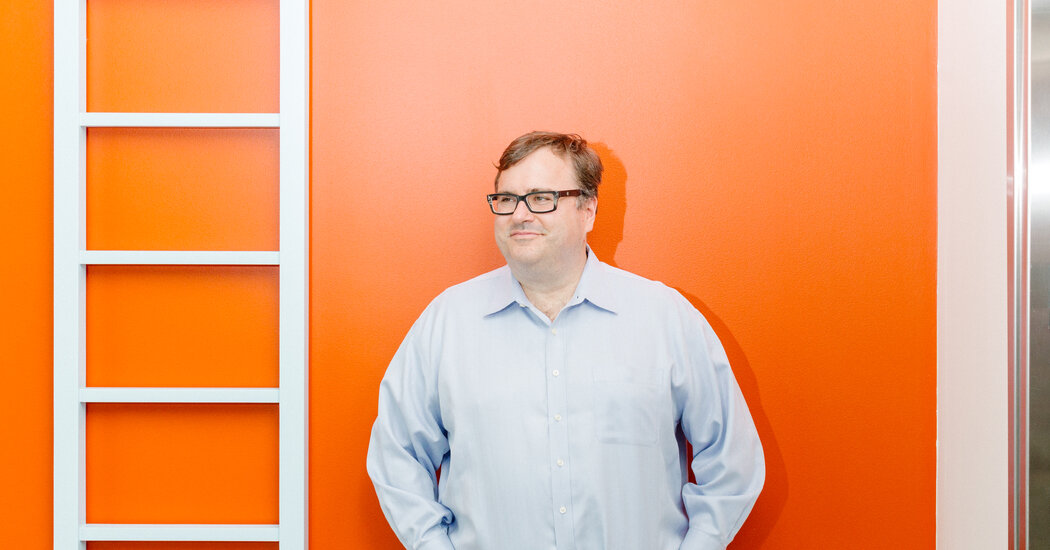 Good morning. (Was this email forwarded to you? Sign up here.)

These days, nothing goes without saying

Tech, finance, media and other executives are calling on Americans to stay cool during a heated election season. “The health of our economy and markets depends on the strength of our democracy,” the LinkedIn co-founder Reid Hoffman said in a statement signed by more than 50 business leaders, provided first to DealBook. The group, convened by the Leadership Now Project, also includes Eddie Fishman, the chief operating officer of D.E. Shaw; Seth Klarman, the C.E.O. of Baupost Group; Lisa Lewin, the C.E.O. of General Assembly; Marissa Mayer, the former Yahoo and Google executive; and Alan Patricof, the founder of Apax and Greycroft.

• “Every vote will be counted,” and election officials should “encourage patience” during potentially protracted counts of absentee ballot.

• The news media should “take caution” and avoid calling the election prematurely.

• Business leaders should “promote patience and civility among employees, communities and the American people.”

“America has successfully held elections through previous challenges, like the Civil War, World Wars I and II, and the 1918 flu pandemic,” the statement concludes. “Now, it is our turn.”

The statement is a testament to the times. “Nothing about 2020 is usual,” said Michael Porter of Harvard Business School, who advises the Leadership Now Project. He said there was “an essential role for business in addressing political dysfunction,” citing recent data showing that political gridlock is causing a “disastrous decline” in America’s competitiveness.

A contested election is a big worry for business. If recent market moves are any indication, businesses are making peace with the possibility of higher taxes under a Biden administration as a trade-off for a definitive election result. Some Wall Street advisers told us last month that they were preparing clients for the possibility of a contested election, as President Trump repeatedly casts doubt on mail-in ballots and is noncommittal on what he will do if he loses the vote. That’s why some executives, like the group putting their names to today’s statement, may feel the need to say what was once obvious.

Congress makes little progress on stimulus talks. House Speaker Nancy Pelosi outlined “insufficiencies” in the White House’s latest $1.8 trillion offer, and then Senator Mitch McConnell, the majority leader, called for a Senate vote on a $500 billion bill that is doomed to fail in the House.

Apple stakes its future on the latest iPhones. The company announced four new models, ranging from $700 to more than $1,000. Analysts said the lower-than-expected prices might entice owners of older iPhones to upgrade. Another draw is the iPhones’ adoption of 5G wireless technology (more on that below).

The E.U. can impose tariffs on American goods over Boeing subsidies. The World Trade Organization gave the bloc permission for levies on $4 billion worth of U.S. products in retaliation for illegal government support for the plane maker. It follows a W.T.O. decision last year to let the U.S. impose $7.5 billion in tariffs on European goods over Airbus subsidies.

The economy isn’t doing as badly as once feared — but it’s still bad. The I.M.F.’s latest forecast expects the U.S. economy to contract 4.3 percent this year, subject to uncertainty about the path of the pandemic. Speaking of which, Harvard’s David Cutler and Larry Summers estimated that Covid-19 will ultimately cost $16 trillion in lost output and the effects of “shorter and less healthy life.”

An earnings season lightning round. In short: JPMorgan Chase and Citigroup reported drops in consumer lending but booming trading results; BlackRock beat expectations with nearly $130 billion in net inflows; Delta lost more than $5 billion and said things wouldn’t return to normal for at least two years; Johnson & Johnson’s bumper earnings were overshadowed by its coronavirus vaccine setback; and AMC Theaters warned that it might run out of cash by the end of the year. (Reporting today: Bank of America, Goldman Sachs, UnitedHealth and Wells Fargo.)

Buying a 5G iPhone is only half the battle

Consumers eyeing the new 5G-enabled iPhones may want to consider the purchase from a policy perspective. Yes, 5G at its full potential is 100 times faster than the standard today. But we’re not there yet.

There are network issues. Wireless technology relies on spectrum that’s allocated via F.C.C. license auctions. (As it happens, the inventors of the complex spectrum auction system won the Nobel prize in economics this week.) There are three bands of spectrum — low, mid and high — that interact in a 5G network. There are drawbacks to the low and high bands, while the coveted mid-band ensures both wide coverage and high data capacity. The F.C.C. wants to free up more mid-band for commercial purposes.

• The Senate Commerce Committee recently introduced a bill to make more mid-band spectrum available for auction by late 2021, effectively reallocating spectrum from the Defense Department. DealBook understands that the committee is confident that all of the relevant agencies are on board with the plan.

There is a debate about nationalization. Some in the telecoms industry believe that the Defense Department is, separately, considering nationalizing some mid-band spectrum. Trade groups’ grumbling has prompted an inquiry by House Democrats, who cite industry feedback particularly critical of Rivada Networks, a wireless company perceived to be angling for a role in helping run a nationalized network. The company has retained Karl Rove, who served as an adviser to President George W. Bush; and it is backed by the investor Peter Thiel, an early supporter of President Trump.

The bottom line: No one can say when 5G will be universally available across America. Industry and the government agree that modernizing network infrastructure is a priority, but differences over the details mean it probably won’t happen soon.

More setbacks in the race for a Covid cure

Eli Lilly said yesterday that it was pausing its trial for a Covid-19 antibody treatment due to a “potential safety concern.” The announcement came a day after Johnson & Johnson said it was pausing its coronavirus vaccine trial because of a sick volunteer. Last month, AstraZeneca said its vaccine trial was on hold over concerns about two participants who had fallen ill after getting the company’s vaccine.

A “pause” is not a “hold.” Study sponsors can, and often do, pause a study when a volunteer gets sick. Once a trial is stopped in this way, an independent review determines whether the illness is a result of the drug. A hold, by contrast, is a regulatory decision made by an agency like the F.D.A. based on concerns about the study itself.

• When it announced its pause this week, J&J made sure to outline the distinction. The company’s finance chief told The Wall Street Journal that it hoped to find out within days whether it can restart the paused trial.

• AstraZeneca has resumed its trials everywhere but in the U.S., where the F.D.A. is still investigating. Sources told Reuters that the hold was a sign of the American regulator being “thorough,” and not necessarily of safety issues with the vaccine.

What you can’t say at Google

Employees at the tech giant have long spoken openly about many topics, from its work in China to sexual harassment. But as Google faces scrutiny from governments around the world, one topic is now off limits: antitrust.

“Google’s leaders have made it clear that antitrust is not a topic to be trifled with,” The Times’s Dai Wakabayashi writes. It’s not to be mentioned in emails or big meetings, and definitely not in job interviews. Workers are reminded regularly that Google doesn’t “crush,” “kill” or “block” the competition.

How Google enforces the unspoken rule:

• People often declare in meetings that a sensitive subject, like competition strategy, is “not for notes” summarizing the proceedings.

• Employees often mark internal communications as “A/C Priv,” referring to attorney-client privilege, and copy lawyers on those messages. The move is meant to shield those documents from regulators, and while it can be challenged in court, can tie up inquiries in costly legal delays.

• Workers are trained to avoid estimating market share so that they have nothing to provide if asked.

Employees are divided on the efforts, which were born out of years of antitrust fights around the world. Some consider the moves overly aggressive — excessive redactions can attract unwanted attention if regulators get their hands on internal documents — while others said that they didn’t care about the issue or that the flurry of investigations had become white noise.

Pret A Manger, the ubiquitous sandwich chain that’s a staple for office workers in London, New York, Hong Kong and elsewhere, is trying anything to survive. The pandemic has made the company’s biggest strength — its city-center locations — its biggest weakness, The Times’s Eshe Nelson writes.

Counting the cost. Pret’s weekly sales in Britain have fallen to what they were 10 years ago, when it had 150 fewer stores, and it has laid off about a third of its staff. It is closing locations, renegotiating rents and moving to a smaller head office.

“When you’re in survival mode, you’ve got to try things,” Pano Christou, Pret’s chief executive, told Eshe. It is thinking about selling its food in supermarkets and has signed up to delivery platforms. It also recently introduced a coffee subscription, offering up to five drinks a day for 20 pounds a month (about $26), to entice people back to its restaurants and collect more data about its most loyal customers.

• Mr. Christou said he got the idea for a coffee subscription from Panera Bread, the U.S. chain also owned by JAB Holding. The C.E.O.s of JAB-owned companies — which include Caribou Coffee, Einstein Bros. and Peet’s — trade ideas in a WhatsApp group, he said. It must be a busy chat as companies delay a return to the office to next summer (if not indefinitely), forcing those dependent on the office economy to rethink their business models.

• Saudi Aramco is said to be in talks to sell a stake in its oil pipeline business to BlackRock and others in a deal that could be worth $10 billion. (Reuters)

• Buying into this week’s I.P.O. of Big Hit Entertainment, the music label behind BTS, is really a bet on the Korean band’s army of fans. (NYT)

• The parent company of Business Insider is reportedly near a deal to buy control of the newsletter publisher Morning Brew. (WSJ)

• Three-quarters of executives surveyed by PwC say that taxes will go up no matter who wins the U.S. presidential election. (Accounting Today)

• “No, There Isn’t Evidence That Trump Owes Money to Russia” (NYT)

• Many companies have emptied out their Manhattan offices during the pandemic, but tech giants are taking up more space. (NYT)

Best of the rest

• At-home meal kits have taken off during the pandemic. But would you buy one for $275, even if it’s from a three-star Michelin restaurant? (Bloomberg)

Thanks for reading! We’ll see you tomorrow.