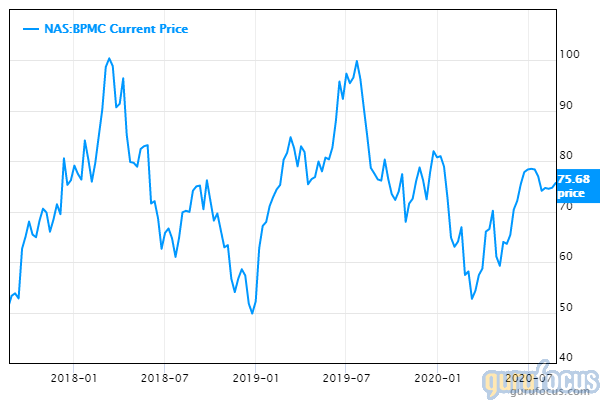 If the 14 analysts polled by CNN Money are even close to being on point, Blueprint Medicines (NASDAQ:BPMC) is a bargain. Shares of the Boston-area biotech trade at just over $74, a few dollars below the targeted low price and a long way off from even the median forecast of $100. So it is no surprise that the stock is rated a buy.

The company’s shares popped a bit in mid-July when the 12-year-old company struck an agreement with Roche (RHHBY) that will infuse it with $775 million. Many think that’s enough cash to enable Blueprint, once a takeover candidate, to remain independent. Blueprint is also eligible to receive more than $900 million if the drug achieves specific milestones.

The pact gives Roche the rights to pralsetinib, a cancer drug known as a RET inhibitor. The Swiss pharma giant now has a competitor for Eli Lilly and Co.’s (LLY) medication, Retevmo, which it acquired in its $8 billion takeover of Loxo Oncology. Eli Lilly won the Food and Drug Administration’s approval for Retevmo in May.

FierceBiotech reported that the agreement should put Blueprint on the solid financial footing needed to develop into a self-sustaining commercial enterprise.

The company has one marketed product, the cancer drug Ayvakit, which was approved by the FDA in January. Sales of Ayvakit in the second quarter were $5.7 million. An additional $2.6 million in revenue came from collaborations with China’s CStone Pharmaceuticals (HKSE:02616), Roche and Clementia Pharmaceuticals Inc., which was acquired by the French company Ipsen (XPAR:IPN).

At $8.3 million, Blueprint’s second-quarter sales were up more than 60% year to year and beat the Zacks consensus estimate of $8 million. Earnings were another story. The company’s loss of $2.28 per share in the second quarter exceeded the estimate of $2.08.

Shares of Blueprint Medicines have declined 7.7% so far this year against the industry’s growth of 5.3%.

In its second deal with Blueprint, Roche gains the exclusive license to sell pralsetinib outside of the U.S. and China. Roche, through its Genentech unit, will co-promote pralsetinib with Blueprint in the U.S. CStone has the rights to the drug in greater China.

Roche’s huge diagnostic business could help the Swiss company market pralsetinib given it treats a tumor type found in only 1% to 2% of lung cancer patients, and between 10% and 20% of patients with a type of thyroid cancer, according to BioPharma Dive.

There’s no FDA-approved test for RET abnormalities, so local laboratory tests, such as those available at major cancer centers, are currently used to confirm an alteration in the gene.

Disclosure: The author has no position in any of the companies mentioned in this article.

Not a Premium Member of GuruFocus? Sign up for a free 7-day trial here.

This article first appeared on GuruFocus.

2020-08-24
Previous Post: Varney: Biden coronavirus lockdown would be economic catastrophe
Next Post: Trump Claims ‘All We Do Is Lose Money’ to China. Here’s What the Data Says